Francis Lechauve is truly a modest man and let’s his wines do the talking. He grew up in the small wine-making town of Meloisey and started working in the vineyards, helping out his neighbor at the age of 12.

Anthony and I are particularly excited by this excellent find in the heart of Burgundy. When I first moved to Burgundy to source wine I had a fear: Burgundy is so “hot” right now, all the good producers already have importers. When I found Francis Lechauve located in the picturesque village of Meloisey, a couple kilometers north of St. Romain I was so excited and impressed by his wines that I took everything I could.
We really hit the jackpot with this traditional, high-quality Burgundian producer.

As you know, all our wines are blind tasted against other wines from the same appellation before being selected. Lechauve was the only producer to have wines place in both the white and red category. Of course, we are not the only ones to love his wines as he received the highest score in the Guide Hachette ( One of the most highly regarded wine reviews in the world) and medals at the prestigious Burgondia tasting event. From the time I gave Mr. Lechauve verbal confirmation that I would take his wine until the time we actually signed the paperwork he lightly complained about his phone ringing off the hook as importers from Korea to Australia were trying to get his wines. I cannot sing the praises of this producer enough, his wines are simply exceptional and we are luck to be his importer.

In case you are counting, by the time Mr. Lechauve would have been able to legally drink in the US he had been working in the vineyards for 9 years, had completed a wine degree and had spent almost 5 years working for a wine producer.

Mr. Lechauve puts as much care into his Haute Cotes as his Pommard. When I tasted with him many months after harvest he still had not put his aligote from the previous harvest in bottle. He told me he was in no rush and preferred a longer elevage. Sorry, this one is already sold out.
Francis Lechauve explained to me that he is “old-school” all his vineyards are harvested by hand (not always common practice for vines in the Hautes Cotes appellation) and during harvest his workers have a well-merited “casse-croute” (essentially everyone breaks bread together). His grapes are sorted once in the field and again in the winery. For his reds he uses 20-35% new oak as to not overpower his wines and of course only indigenous yeasts. 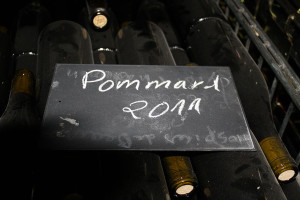 These wines are meant to age so if you are tempted to open them early, please decant. Anthony and I visited him in late 2012 and he showed us a beautiful Hautes Cotes from 2004. After Anthony and I both looked at each other to say “delicious” he simply said “and you see, people say Hautes Cotes does not age well…”